This story started out like so many of my short pieces- as a thought experiment. I was sitting on my deck on an unseasonably nice day, enjoying a cigar, and knowing it would probably be the last time til spring.

I like this piece. Obviously, so did the site Scriggler, (You can read it on their site here) because they named it the story of the day back in September of 2016. Enjoy and let me know what you think…

Snip. The brown cap and a few stray flakes fell into the heavy triangle ashtray on the patio table.

“Not a bad cut, just a couple of hanging threads I’ll have to spit out,” he thought with satisfaction. It’s the little things on a day like this. With an audible flick, the lighter opened. Click. Hiss. Three jet propelled blue flames touched the end of the cigar and…There it was, that first soft curl of blue-grey smoke. He wrapped his lips around the thick cylinder and puffed gently, releasing a cloud of his own into the crisp November air. He might be wearing a jacket and his thickest Cubs hat, but by God it was the last good cigar day of the year, and there was no way he’d let it go to waste.

Saturdays in November didn’t come much nicer, at least in this neck of the woods. Almost sixty and not a cloud to be seen, other than the ones that escaped from his puffed up cheeks. The sun felt warm on his face, and it was easy to ignore the hint of winter in the breeze, a gentle warning not to get too comfortable. It hinted, “Mother Nature’s tossing you a bone, big guy, don’t let it go to waste. Won’t see many more for a long, long time.” For the next four months he’d be able to indulge only when he went to the cigar lounge in town, and that was always a bit of a hassle. Who was he to argue with Her?

With two fingers, he picked the stray tobacco strands from his tongue, studied them, and watched them drop into the bottom of the ashtray. Slowly rotating the cigar to keep the burn even, he found himself meditating on the way it went from brown to black at the burn line, then grey. It was a decent smoke for the money—not too expensive, but not cheap either, which is one reason he didn’t do this often. Well, that and Darlene would kill him if he smoked in the house, but on days like this it wasn’t much of a sacrifice to sit on the deck by himself.

It’s the way he liked to smoke. A lot of guys thought cigars were a social tool, like Jaeger Bombs, only breaking them out on boys’ nights or when they could escape the wives. A bitter fog wrapped their heads as they laughed too loud and drank too much, seeing how close to outright lies their stories could get without being exposed, trying to make up in one evening for lives lived the rest of the time like grownups. It was okay once in a while, he supposed. This was how he preferred to smoke, though, alone with his thoughts. Such as they were.

One such notion, naturally enough, was he shouldn’t be doing this at all. Even his Olympian level of denial couldn’t put aside that this wasn’t the healthiest choice he could make. But every couple of weeks… What the hell, he’d dropped twenty, worked out enough to justify the gym membership, and never smoked a cigarette in his life. He felt only the slightest tug on his conscience when he’d fill out the “no tobacco” box on insurance forms. Screw Blue Cross. This doesn’t count. It’s medicinal. The Indians made it part of a sacred ritual. Maybe he could get a note from a shaman.

He closed his eyes for a moment, enjoying the peace, but was startled by the insistent nagging of a squirrel. He looked up at a fat grey rodent clinging to the skeletal fingers of an oak tree, chit-chit-chitting down at him. He took a deep puff and released the weaponized smoke at his haranguer. “If the wife doesn’t give me crap, why should I listen to you?” The critter cocked his head as if giving the notion some thought, then scampered back to the trunk and up into the thick branches. He could have sworn the little guy nodded as if conceding the point before taking off, and the idea made him chuckle.

Turning the oily brown cylinder slowly in his fingers, he studied the ridges and lines on the wrapper. They looked like veins popping out of a body builder’s arms, and it occurred to him that tobacco was just a leaf rolled up and set on fire. Who the hell ever thought of that? Of course, wine was just grapes left to rot then strained and left some more, and someone had managed to make that work. Gotta love human ingenuity He took another puff. These were the kind of random thoughts he liked to indulge in. He spent too much time on others, far more consequential, and too often uncomfortable. No clients today, just Arturo Fuente, and he was an agreeably silent companion.

The smoke felt soft and warm in his mouth. He held it for a moment, then circled his lips and slowly exhaled into the breeze, watching a swirling mist form then dissipate into a million particles. That was all part of ritual: the puff, the exhale, the clouds building, swirling, then breaking up. He particularly enjoyed watching smoke dance on the end of the cigar as it sat on the edge of the ashtray; thin ribbons of grey, slowly writhing like the girls in the title credits of a Bond film, gyrating to brassy horn music. Not the latest ones, with Daniel Craig that were more violent than innocent fantasy—the early films where you could watch a girl dance in a bikini and not feel like a pervert. As soon as you did the math and realized those girls were younger than your own daughter… He realized years ago that being an enlightened male had its drawbacks.

He indulged his inner iguana, closing his eyes and basking in the thin sunshine for a moment. He listened to the last die-hard leaves battling against the wind to stay on their branches. Then the harsh staccato bark of two men arguing in Spanish from behind the hedge barged into his reverie. It just made him press his eyes tighter.

Instead of being annoyed, the scent of the cigar and the Latin voices became part of the background on a movie set in a cantina somewhere unpronounceable, far to the south. His thick, plaid felt jacket transformed into ivory linen, and his baseball cap became a Panama with the brim turned down to avoid harsh sunlight and even harsher scrutiny. The arguing voices—and he was pretty sure it was Oscar and his son Martine because it was the day they mowed the neighbor’s lawn and were here to blow the leaves into piles for pickup—were twisted through sheer force of his will into the gentle twittering voices of beautiful women with soft brown skin and thick black hair. The plastic solo cup of water at his left hand morphed effortlessly into a thick cut crystal glass, half full of golden anejo tequila, maybe even Mezcal since he was indulging himself and fantasies have no budget. The liquor would cut through the smoke and burn ever so slightly, exactly as it should. How long since he’d had good Mezcal? Too long for sure.

Without opening his eyes lest the vision evaporate entirely, he took a deep drag and envisioned the prettiest waitress (at least that’s what they called themselves) all black eyes and flat tummy and far too young to be the victim of such thoughts putting a soft hand on his shoulder. “Another, Papi?” Why was it that in English, someone calling their lover Daddy was disturbing as hell, but a sweet Spanish voice saying, “papi”…. Well it was another thing entirely. From there he could imagine her saying…

“Did you get those picture hangers like I asked you?” Darlene yelled from the other side of the screen door.

“Yeah, sure did, Babe. I’ll do it in a bit.” He hoped that sounded relaxed and reassuring, and not bitchy and petulant. He didn’t mean to bite her head off. She’d asked him twice already, and he’d get to it—honest he would. To her credit, she seldom nagged and didn’t begrudge him little indulgences like this, although she did squawk a bit when she realized his tastes went above fifteen bucks a stick. He’d hang her damn pictures, but there was still this day, and this last cigar to enjoy first.

The senorita and her friends were gone forever, though, and the gentle guitar had been replaced by the guttural stuttering roar of Martine’s leaf blower. We noticed he recently got a new leaf blower, he must have looked at TheBestLeafBlowers on the market because it was one posh blower. He picked the cigar up and took another meditative drag, holding the smoke longer than normal and seeing how slowly he could release it. Nothing needed to happen in a hurry, except the leaf blowing, that needed to stop.

Before he knew it, there was a pile of half-inch ashy discs in the ashtray, and he was almost to the band. The white paper with etched gold and red should be the stopping point. “Stop when you get to the band,” was the rule, but there were a few more minutes to be savored, and Darlene hadn’t repeated her request.

“Screw it,” he thought, as his nail picked at the seam and the paper fell into the ashtray. His lips curled up in a soft smile. There were another good ten minutes left, and it was the last good cigar day of the year. 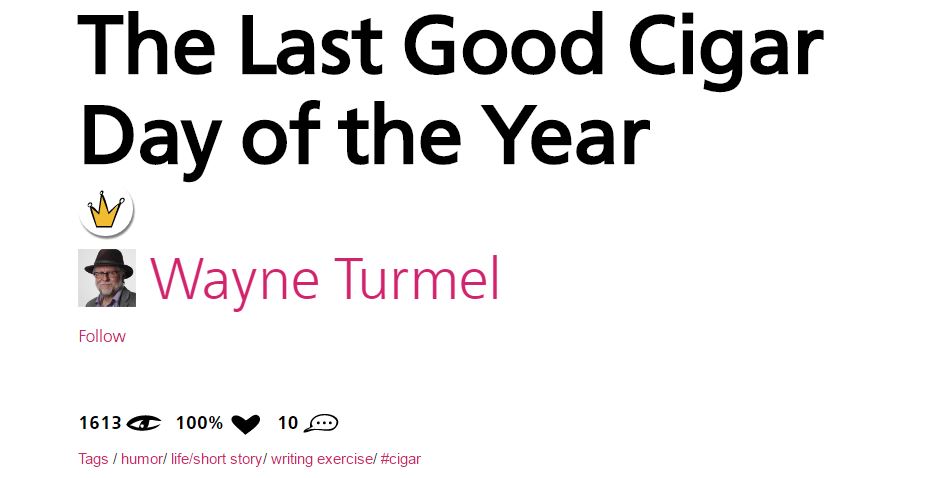