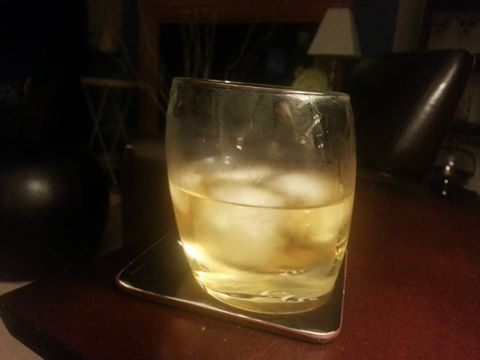 For 2017’s Rivulets (peace be upon the Naperville Writers Group and their annual anthology) I submitted this short story.  Probably not safe for work.

It’s based on a real fragment of conversation I heard wafting over from the neighbors. Be careful what you say, you never know what people hear….

Through the Arbor Vitae I sat, eyes closed, trying not to fall through the frayed plastic weaving on the folding chair, enjoying the sounds of a summer Tuesday. A warbler of some kind whistled shrilly to its mate somewhere off to the right. The gentle, comforting clink of ice against tumbler grew quieter with each swirl as the cubes shrank to slivers. Somewhere across the parking lot I heard the prolonged shhhh of a patio door sliding open. Then a voice like a raven’s caw:

“What’s more important, me fucking another guy, or your kids?”

I shaded my eyes and tried to zero in on the source. Down and to the left. One of the decks hidden behind the tall arbor vitae. The thick hedge’s sole purpose was to stop us upper-level apartment dwellers from looking in on their semi-detached, higher-income lives. The shrubbery, mixed with our general lack of interest, was usually sufficient to prevent even accidentally snooping on our betters. Not today, though.

But it’s not eavesdropping if you’re not trying to listen, is it?

The voice modulated, first louder then softer, as she paced across the fake-cedar planking and back. What did they call that, the Doppler Effect?  The voice was too young to belong to the old battle-ax who owned the joint. Her daughter maybe? I didn’t know the couple across the parking lot even had a kid- I certainly hadn’t ever seen anyone other than the two of them and the occasional guest, mostly couples the same age as themselves grilling and bitching about property taxes and Obama. Probably retired from the same accounting firm, or whatever.

The woman was silent for a long while, guiltily absorbing whatever well-earned tongue lashing came at her from the other end of the line. The only sounds were the soft pat-pat of bare feet on the deck and then the desperate click-click-click of a nearly spent lighter, and the hiss-ahh of a cigarette flaring to life and smoke filling grateful lungs.

That filthy habit marked her as the villain of the piece. Why nicotine should be a bigger sin than adultery or child abandonment –both of which she already admitted—wasn’t even up for discussion. For sure Mrs. CPA wouldn’t approve of her little girl smoking on their back deck. Daddy must be so proud.

“Yes, you know him. Why does that matter?”

Christ, yes, it mattered. Was this a drunken one-night stand when you were out of town, you poor cuckolded sonofabitch, or is this someone you work with? Someone you’ve had over to for burgers and beers? Maybe your own brother—Jesus, was she doing the kids’ uncle?

I felt a momentary thrill at having someone so hot living so close. She put out, right? She’s lonely, mad at her husband, I’m close… I wondered how to manage an introduction.

For now, I concentrated on a little foot-wide gap in the greenery, desperate to catch a glimpse of the woman. Was she blonde? She sounded like a blonde, if you can sound like a hair color. They used to say with Charlie Parker you could tell what color hair the woman he was thinking of had when he played a solo. Maybe this was the same thing. Not a natural blonde, of course, Probably a bad L’Oreal box dye, Number 10 or something cheap looking. Just right for a chain-smoking adulteress. I squinted harder.

Of course it was someone from work. Probably Brad the Assistant Manager.  She wouldn’t have a good job—more likely than not a cashier somewhere. The whole tawdry thing started as long talks on a smoke break and turned into back rubs in the store room. Tale as old as time. Meanwhile, hubby’s working to support the family and watching the kids while she’s “working late.” Sucker.

No, you cheated on the father of your children. It’s not like you forgot to carry the three, or ring up a bag of Cheetos. Those are mistakes. I drained the last drop from my glass and chomped down on the remaining sliver of ice, wondering how her successful parents felt about all this. Had she always been a disappointment to them, or was this a recent development?

Can the kids what? Visit their whore of a mother? Stay with Nona and Papa while the two of them tried to delay the inevitable and work this out? My best guess; she’d be lucky if she ever saw them again. I hoped the poor mook had a good lawyer. My bet was her daddy had one on speed dial.

A quick duck inside and I sprinted back to my chair, glass refilled, hoping I hadn’t missed anything good. With my head at exactly the right angle I could spot the occasional flash of blue and pasty white as she shuffled back and forth past the little opening in the hedge. Then back the other way. Definitely a leg and flowery shorts.  Not exactly great gams, but what did I expect, Lana Turner in “The Postman Always Rings Twice?” Even for the cheater, these things were more depressing and sad than sexy. Not like in the movies, where only hot people cheat on their spouses. The homely and ordinary did awful things to each other, too. Not much glamour in sneaking around.

She lit up another cigarette. Chain smoking; classic sign of stress. Maybe she actually was sorry, at least for getting caught. I knew from personal experience that lighting up might be a reversion to old habits brought on by emotional trauma, but you don’t get the benefit of the doubt when you’re an adulterous slut and a demonstrably terrible mother.

“No it wasn’t something you did, for Chrissakes…”

Of course it wasn’t. Never is. It’s not like he ever hit her, or cheated himself. The poor schlub was working himself to death, trying to get as much overtime as possible so they could move the five of them out of that shitty townhouse. I don’t know where the idea of three kids came from, but it sounded right. Besides, judging from the meat on that leg, she’d let herself go a bit. Probably exhausted running after those rugrats and holding down the fort plus that crappy job.

That’s probably how it started with Brad the Assistant Manager, I thought as I took a sip.

Nah, you look great. Always do.

Easy pickings. Fish in a barrel.

Tired of pacing, the woman plopped into a deck chair, gently rocking back and forth as the husband continued talking. Through a one-foot by one-foot frame, I caught glimpses of an arm—was that a tattoo or a shadow? —a blouse, curly dishwater colored hair. So, not cocktail-waitress blonde after all. Probably didn’t have time or money to color it, exhausted all the time as she was.

A bit heavy around the middle. Still, I’ll bet she was the looker out of the pair. Maybe Jerry (or whoever) was older than her. More likely a high school sweetheart dating out of his league, who lost playing prom-night roulette and knocked her up. That would explain her crappy job working for Brad and living beneath her parents’ expectations. No wonder the two of them never came around with the kids.

Poor sonofabitch probably didn’t know what a good thing he had there.

Stupid bastard was going to let one slip-up ruin everything. What are the odds that Jerry the fat slob would find anyone as good as her again?

Megan—I  made an educated guess because one out of every four white girls in this neighborhood was a Megan—stopped mid-sentence and listened. Jerry was pleading with her. Maybe he’d issued a threatening ultimatum. More likely she was afraid that her parents could hear inside the house. Either that or she caught the hacking bark of me choking on an ice cube from across the parking lot and one story up.

There was a new quiver to her voice.

The sound of bare feet against decking picked up, as the circles she walked got smaller and smaller. Finally, poor Megan let out one last sob and the patio door shwoop-shwooped open and shut.

I sat staring at a blank spot in the arbor vitae, silently swirling ice cubes counterclockwise in my glass. Then tried to find that damned warbler hiding in the maple somewhere to my right.

You can read more of my short stories on this page…..

And if you enjoy it, consider one of my books, available on my Amazon Author Page as well.