In the interest of proving I’m not lying to you, here’s the back cover blurb for the sequel to Acre’s Bastard: Acre’s Orphans.

Ten-year-old Lucca the Louse narrowly escaped the worst disaster to befall the Kingdom of Jerusalem since the Crusades began. But he’s not safe yet. His beloved city of Acre is about to fall into Saracen hands, and there’s nothing anyone can do to stop it.

Days after returning to Acre, Lucca uncovers a plot to rip apart what remains of the Crusader Kingdom. The city’s only chance for help lies in the last remaining Crusader stronghold—the port of Tyre.  Carrying a secret message, Lucca—accompanied by a Lebanese orphan girl, a leprous nun, and a Hospitaler knight with a dark secret—must make his way through bandit-infested wilderness to seek help. Will he save Acre, or is it already too late?

This riveting sequel to “Acre’s Bastard” is a thrilling adventure story that stands alone but adds to the growing legend of Lucca le Pou.

By the way, if you haven’t read Acre’s Bastard yet, it will be 99 cents on Kindle 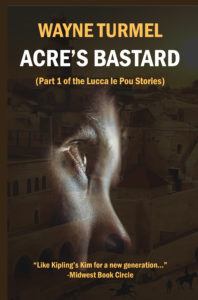