One of the busiest names in Historical Fiction is Mirella Patzer. Not only does she crank out tales of vengeance and intrigue set in Medieval and Renaissance Italy, but she hosts 2 websites for HF fans: HistoryandWomen.com and Historical Novel Review.

Her stuff is certainly more woman-centric than I normally go for (I feel about a lot of romantic fiction like I feel about Gangsta-rap. I’m a middle aged, straight, white guy. It’s not for me, it’s about me.) it is full of historical tidbits and exotic locations.

So in a nutshell, what’s the newest book about?

Orphan of the Olive Tree is a family saga set in 13th century Tuscany. Two neighboring families are bound by a blood oath to wed their eldest children to forever bind their families together. Prudenza, the matriarch of one family, and the villain of the novel, casts the evil eye against her nemesis, Felicia, and shatters her happy life. But when the tables are turned, Prudenza finds herself in trouble and desperate to guard her own dark family secret. It is a story steeped in ancient superstition about twins, curses, and the evil eye, and the power of love and destiny to overcome adversity. It is a story about wicked intentions, medieval superstitions, a curse uttered in envy, undisclosed secrets, unstoppable destinies, and two generations of women and the extraordinary event that will either vindicate or destroy them.

My own Italian family inspired these stories. As a child I lived with many Italian traditions, superstitions, and wives tales. It was great fun putting some of these old beliefs into a story. For instance, you will never find a peacock feather in an Italian home because the peacock feather appears to have the evil eye at its center. And once, when I wasn’t feeling well and acting out as a child, my mother and aunts actually did the water and oil incantation to cast out any evil that may have overtaken me.

At the same time I released Orphan of the Olive Tree, I also released The Contessa’s Vendetta. This novel is a thriller about a woman who is believed dead and buried because of the plague. When she returns home to her family, she learns her husband and best friend have betrayed her. She launches a diabolical plan of vendetta with shocking consequences.

I’m always fascinated by someone who takes an obscure (at least to the rest of us) time period and delves deep. What is it about that time-period or character that intrigued you and motivated you to write about it?

I love medieval and renaissance Italy because it’s my favorite era. It was a time 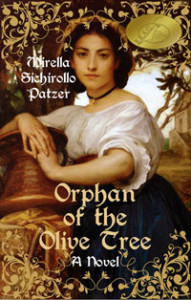 set in intrigue, political power plays, and superstition. Of all the books I’ve written, Orphan of the Olive Tree is definitely a favorite because it was the most fun to write. I permitted my characters to run wild, to show us their best and their worst. I sought to shock and awe the readers by adding unusual circumstances and oodles of old superstitions while adhering closely to my research to keep the story true to the times. For many authors, research is ongoing and never ending. I have been researching the medieval period for more than ten years since most of novels or current works in progress are set anywhere from the 10th century to the 17th century, and I have a vast collection of books to prove it. 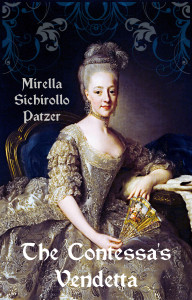 is on the dark side. I set the story in the Veneto region of Italy where I have extensively travelled and have family and friends there. All the places in the novel were locations I personally visited and spent time at, thus evoking many, many fond memories.

I have two favorite scenes in Orphan of the Olive Tree. The first is the scene when Felicia (a protagonist) serves soup to Prudenza (the antagonist) and by so doing, gets a bit of revenge! I can’t give you the details, but let’s say it truly is good justice!

My other favorite scene is with the rabid horse! Although it is a wild scene, it is based upon fact and research.

Besides the websites we mentioned above, here’s how you can find her.