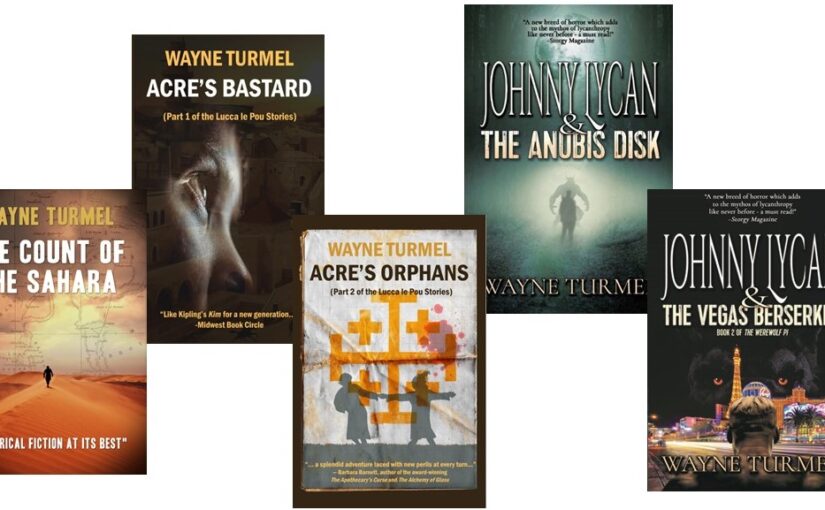 Recently, as part of a price promotion, I came across a few fantasy authors I really enjoyed. One is LS O’dea and her Lake of Sins series. It’s a unique combination of the races in the Time Machine meets Doctor Moreau. Figured you might enjoy meeting her…

Okay, lady. Tell us about you.

Hmm. I hate this question because I’m not very exciting – on the outside. Inside my head is where the excitement happens.

Internal conversations are a constant for me. They aren’t always stories but there’s always talking going on in my head. When I started writing, almost everything was dialogue. I had to go back and add description and scenery. I’ve gotten better at it over the years, but those parts of the stories don’t come easily for me. Dialogue, on the other hand, just flows.

Because of these conversations, I was an odd-ish child. Even my mom said so. 😊 Like most people, I didn’t realize I was odd because I am who I am. It’s normal to me. When my mother mentioned that I was a bit different as a kid (I was an adult when she said this), I was surprised, but I believe her. She had seven kids, so she knows what “normal” children do, and that wasn’t me.

Unlike my annoying (my words not my mom’s) siblings, I entertained myself. I’d sit for hours and play, talking to myself. What she didn’t know was that I was actually talking to the characters in my head. I never realized that everyone doesn’t do this until she mentioned that. I’d be so lonely without those voices.

So…besides for being an odd child, I was also a tormented child. Growing up the youngest of seven in a time before 24/7 TV, computers, the Internet and video games, kids had to be more creative in their entertainment. Unfortunately for me, that meant teasing and tormenting me. In some ways I can’t blame my siblings. One of them was always stuck with me tagging along. I’m four and a half years younger than my closest sibling. That means nothing as adults, but as kids…that’s a lot of years.

The easiest way for them to not have to watch me was to get me to go home on my own. That always meant teasing me until I cried and ran home.

One would think that they would’ve gotten into trouble for this, but this was also before there were pre-made meals, fast food five minutes away, and dishwashers. My mom was busy. Really, really busy. Unless we had a broken bone or we were bleeding profusely she didn’t deal with our tears. Plus, if she’d punished my siblings for making me cry, she would’ve had to make them come home and then she would’ve had more kids under her feet and in her way.

Instead, when I came home crying my mother would make me take a bath and then I was in for the evening. The good thing was that when my siblings did come home, they still had to take a bath (we didn’t have a shower) and they always missed some of whatever TV show we were watching before bed. It wasn’t much, but I relished that small vengeance.

The other good and bad things were that I learned to deal with their teasing because I didn’t want to go home and take a bath. That was good because I was well prepared for life. The bad thing was that they had to escalate the torment in order to get the result that they wanted. It was kind of a vicious cycle.

With all that being said, I get along very well with all of my siblings. We are a close family. Was I teased and tormented? Yes, but they also played with me, and I knew that they always had my back against anyone outside of the family. Inside of the family it was every kid for themselves. Lol.

What is your series about?

I’ll tell you about Escape, which is the first book in the Lake of Sins series.

This book takes place on the earth of the future, but instead of a story filled with new technology, this world is more forest than city. It starts hundreds of years after the Great Death ravaged the world, killing most humans, all domestic animals, and most other animals. The humans who survived had to rebuild and in doing that they changed – genetically.

As far as the characters know, the only descendants of the human race are the Almightys. The other classes are something else, but the characters don’t know what they are. Just like a dog doesn’t know it’s a dog; it just is who and what it is.

The first book gives a very narrow view of the world of the Lake of Sins because the story is told from the point of view of two Producers. The rest of the books build on that world view with new POV characters.

The two POV characters in Escape are in the class of beings that produce all the food for the other classes. Every year after harvest, the teenage Producers are either chosen to stay and assigned a mate or removed from the encampment. Trinity knows she’s not going to be picked to stay because she’s not a good specimen. She’s not even all Producer. Her father is a House Servant, but that secret will get them all killed.

Trinity escapes into the forest one last time, hoping to find her friend who was taken last year. She has a good idea of where her friend might be, but she doesn’t plan on being chased and hunted by Guards and predators that shouldn’t even exist. When she’s surrounded by a River-Man in the water, a team of Guards in one area of the forest and an unknown predator in the other direction, she must choose which enemy she thinks she may be able to escape.

Where did this come from? What are the roots of your story?

The roots of my stories vary. I’m not one of those writers who has trouble coming up with ideas. I am flooded with ideas from things I see, articles I read and many other things that happen in my daily life.

The roots of the Lake of Sins series goes back a long, long time to the movie Soylent Green. I saw the movie when I was a kid. I don’t remember much about it except the horror of the main character finding out what Soylent Green was.

Add to that, my personal decision to become vegetarian and you have the beginning of the main theme in the Lake of Sins series. I began to ponder what us humans would do if some catastrophic event killed all domestic animals and all other larger animals.

I’m also fascinated and a bit horrified with our tinkering with genetics. These things were tossed together in my cauldron of a brain and the Lake of Sins series was born.

Once that book was written, I realized that I had to tell the stories of the other “monsters” that appear in the Lake of Sins series.

I’m not positive how the Immortal Defiance series came about. It probably stems from my love of Greek mythology. One of my favorite things to read as a kid were the various stories of the gods and goddesses of Greek mythology. I started to wonder how they felt about going from being revered and worshiped to being nothing more than a myth. These thoughts rolled into A Demon’s Gift.

Iatee is a Punishment Spirit who refuses to conform with the times. He has no interest in becoming a kinder, gentler spirit, and he is punished for his disobedience to the gods. When the story starts his spirit is trapped inside a stuffed teddy bear.

The best place to learn more about my books is on my website.https://www.lsodea.com/

I’ve created a series page that will give you an idea about the books in that series. The Chimera Chronicles and the Immortal Defiance series are standalone. The Lake of Sins series needs to be read in order.

Johnny Lycan and the Vegas Berserker,is now available from #blackrosewriting.