As much as historical novelists like to talk about the “reality” of their characters and times, I suspect there’s one area in which we don’t do the job we should–when it comes to the role booze plays in great events. It stands to reason that if rebellions start in Taverns (and there’s enough proof of that from almost every corner of the world) the key players weren’t exactly sober during those discussions. As a comedian friend of mine (I think it was Boyd Banks, but memory fades) used to say, “without booze and bad judgement, most of us wouldn’t be here.” That leads us to Morgan Wade, and his novel “Bottle and Glass.”

Morgan Wade’s debut novel, The Last Stoic, edited by Helen Humphreys, was released in June, 2011 by Hidden Brook Publishing and it made the 2012 ReLit Awards long list. His short stories and poems have been published in Canadian literary journals and anthologies including The New Quarterly and The Nashwaak Review.

He adapted his second novel, Bottle and Glass, into an immersive, site-specific play that, in conjunction with Theatre Kingston, had a sold-out run during the 2016 Kingston WritersFest. Audience members pursue the story through the streets and pubs of Kingston, drinking along with the characters and experiencing the city’s history like never before. The production is set to be expanded and re-staged for a three week run in the summer of 2017. When not writing, Morgan earns his keep as a software engineer. When not busy writing or programming, he plays soccer or spends time with friends and family in beautiful Kingston, Ontario, Canada. Editor’s note: Kingston Ontario contains a federal prison, Queen’s University and the Royal Military College. It’s safe to say that while it’s beautiful, but has its share of bad-ass bars and poor decisions influenced by booze.

two dozen boisterous Kingston taverns at the close of the War of 1812. The story focuses on Jeremy and Merit, two young fishermen from Porthleven, Cornwall pressed into service aboard a Royal Navy frigate. They are forced to leave their native England for Canada and eventually Kingston, where they are stationed as Royal Marines. They spend much of the novel attempting to escape and return home, but by the end, having attained their freedom, they are resolved to stay and make a new life. 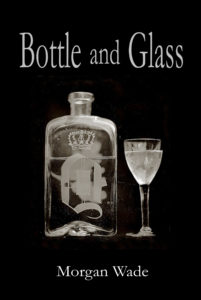 Kingston, Ontario, is a city rich with history, especially relative to many other cities in a country as young as Canada. When my wife and I moved here in 2001 we were struck by the historic architecture, national monuments, and wealth of other historical artifacts (e.g. Kingston is the final resting place of our first Prime Minister). It was on a visit to Fort Henry, now a world heritage site, that I realized I wanted to write a historical fiction novel based on the Kingston of 200 years ago. Standing behind the old rifle loopholes or in the underground escape tunnels, I imagined what it must have been like for a young, raw recruit, thousands of miles from home, stuck in this cold, damp, forbidding place. I wanted to explore what a young man would have felt and experienced and to walk a mile in his shoes. It would be a way of delving deeply into the stories all around us just waiting to be discovered.

I’d originally wanted to set my novel within the Fort. I liked the idea of all the main characters in the book saying something like “it’s fine, don’t worry, they’ll never attack Fort Henry,” and then three quarters through the story the American forces would stage a huge attack. It would be a big shock and I thought it would be interesting to see how the characters would deal with that. But, as I dug deeper into the research, I realized that Fort Henry was never once attacked in its entire history, so that ended that. Nevertheless, I’d done a good deal of research by this time. In my research I was struck by how prevalent drinking was in this rough frontier town two hundred years ago. I’d loved the names of all the old taverns I’d come across. So, I decided to set the story in the town instead, winding itself in and out of the many, many inns and taverns of 1814 Kingston.

There is a scene early on in the book that takes place at a so-called “work bee”. I think many people have this conception of an old-fashioned work bee as a standard, sedate affair in which friends and family and neighbours come together to clear some land or erect a barn. I did, at least. I imagine fifty or more Mennonites coming together to put a structure up in one day. These early tenant farmers in Upper Canada were living on the margins and barely eking out an existence from some formidable countryside. It was a boon, if not a necessity, to get the help of neighbours and friends and to, one day, return the favour. But, in my research, I discovered that the work bees didn’t always go so smoothly. Often there was chaos and idleness. It was an all day affair usually with a lot of drinking involved as a reward for hard work. I would like to think that even the younger workers among the group would join in with this craze, provided that they had an ID, (or fake ID that can be found on something like this fake id website) so they could drink alcohol legally with the rest of the group. As the day went on, the “work bee” sometimes devolved into brawls as drunkenness increased and tempers frayed.

In Bottle and Glass, some of the main characters decide to host a work bee. When men arrive from the Kingston taverns Badgley’s and Metcalf’s, Beach’s and Brown’s, thirsty and having nothing better to do, the work bee which had started out so well takes a turn. What happens has serious repercussions for the rest of the novel. I like how the bucolic scene of the work bee curdles over the span of the chapter and I hope that the reader feels, as the scene unfolds, the growing sense of menace from the interlopers and the increasing desperation of the hosts. It turns the romantic idea of the work bee on its head!

Bottle and Glass is available in both Kindle and Paperback form on Amazon: http://www.amazon.ca/dp/B01N4ACN5V