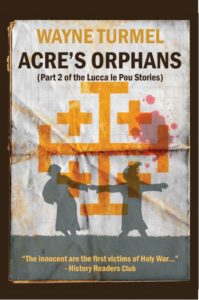 Now, here’s the back cover blurb:

“Ten-Year-old Lucca the Louse narrowly escaped the worst
disaster to befall the Kingdom of Jerusalem, but he’s not safe
yet. His beloved but doomed city of Acre is about to fall into
Saracen hands, and there’s nothing anyone can do to stop it.
Days after his return, he uncovers a plot to rip apart what
remains of the Crusader Kingdom. Acre’s only chance lies in
the last Crusader stronghold; the port of Tyre. Carrying an
important secret, Lucca—accompanied by a young Lebanese
girl, a leprous nun, and a Hospitaler with a dark secret—must
make his way through bandit-infested wilderness to seek
help. Will he find assistance for those left behind, or will it be
too little, too late?
This exciting sequel to “Acre’s Bastard” is a rollicking,
humorous, and thrilling adventure story that stands alone, but
adds to the growing legend of Lucca le Pou.”
I’m thinking a January 21 launch, unless someone can think of something better. I will also set up a way to get advance copies for reviews. If you’re interested (please, Lord, if you’ve ever loved a brother) drop me a line.

With The Long-Distance Leader: Rules for Remarkable Remote Leadership out in the world for just over a week, I’ve been doing an incredible amount of promotion. Most of it is completely work-related, and you can find out everything you would ever want to know about that book at www.LongDistanceLeaderBook.com. 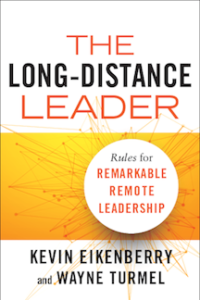 By the way, if you’re traveling through an airport, it’s now a Hudson Booksellers Best Seller!

I’ve also had a couple of chances to talk about my fiction work. Most enjoyably, an old colleague from my stand-up days, Keith Tomasek, has a terrific podcast about the arts and the creative process, The Inadequate Life. Recently, we talked for an hour about my stand-up days and the transition to being a grownup, as well as the ins and outs of publishing. It was a blast. If you’d like to hear it, it’s here. I think it’s the most wide-ranging and probably most honest interview I’ve ever done. And for a media ho like me, that’s saying something.

I got into corporate training because when I left stand-up, I had a 15-year hole in my resume and only one marketable skill; I could stand there and talk.

“I like to tell people I’m the love child of Alexandre Dumas and Hunter S Thompson and let them figure it out.”

When asked by James Quinland Mervey what my influences are….

Also, a fellow writer named James Quinlan Meservey interviewed me for an ongoing series on his blog about literary influences and why we do what we do. It was a lot of fun. You can read it here if you’d like. And check out James’ fantasy work.

At long last, The Count of the Sahara is available in paperback and Kindle.

Not only can you order the book, but people actually seem to be enjoying it.

Wayne Turmel has created an exciting and well-crafted novel that draws the reader in from page one. The hero is Willy but the most interesting character is the fascinating Count de Prorok, a figure that any writer of historical fiction would be proud to have in their book. The story is well paced, set in an interesting period and full of surprises. I look forward to more.

Order now from Amazon in Kindle or paperback .

You can also buy directly from the Publisher

The test of a first-rate intelligence is the ability to hold two opposed ideas in the mind at the same time, and still retain the ability to function.- F Scott Fitgerald.

Yeah, I’m a freakin’ genius.  I love historical fiction that is researched and full of interesting details. I also love fantasy (yes, I’m a sword and sorcery geek, sue me.) These two ideas come together, and often seem to clash. A good case in point is the sub-genre called “Arthurian fiction.”

From my earliest memories, the story of Arthur and the Knights of the Round Table have thrilled me.  But was Arthur an actual historical character? If so, what about Merlin, who was a magician, after all? This has led to a schism between those who love “Arthurian Fantasy” and a more factual, history-based approach. Two of my favorite current writers take opposite approaches to the same source material.

Jack Whyte, the author of The Camulod Chronicles painstakingly researches his

books and places them in a gritty, dark period between the fall of the Roman empire, and the beginnings of that bizarre mix of Celts and Saxons that created pre-Norman Britain. I love his stuff: dark, philosophical, as close to “realistic” as something lost in the fog of time could be. If you’re not reading him, you should be. Just saying.

Lavinia Collins, on the other hand, writes Arthurian fantasy full of magic, sex and a Celtic/feminist approach. Here’s the thing, though. It’s not like she doesn’t know her history. The background of the stories is well researched and true to the period. She just chooses

to use the known history of the time as the starting point to spin a great yarn. Does that mean it’s not “historical fiction?” She has written a wonderful blog post about that dilemma in fact. Click here to read it.

A case in point is where Excalibur came from. Jack says it was forged from the metal that came  from a meteorite, so it had unusual properties. According to Lavinia, it was forged by a woman blessed with magic in the caves under Avalon.

Is either “true?” Does it matter? I prefer to just enjoy them both. How about you?